VERU-111, an Oral, Next Generation, First-In-Class Small Molecule for the Treatment of Metastatic Prostate and Other Cancers. 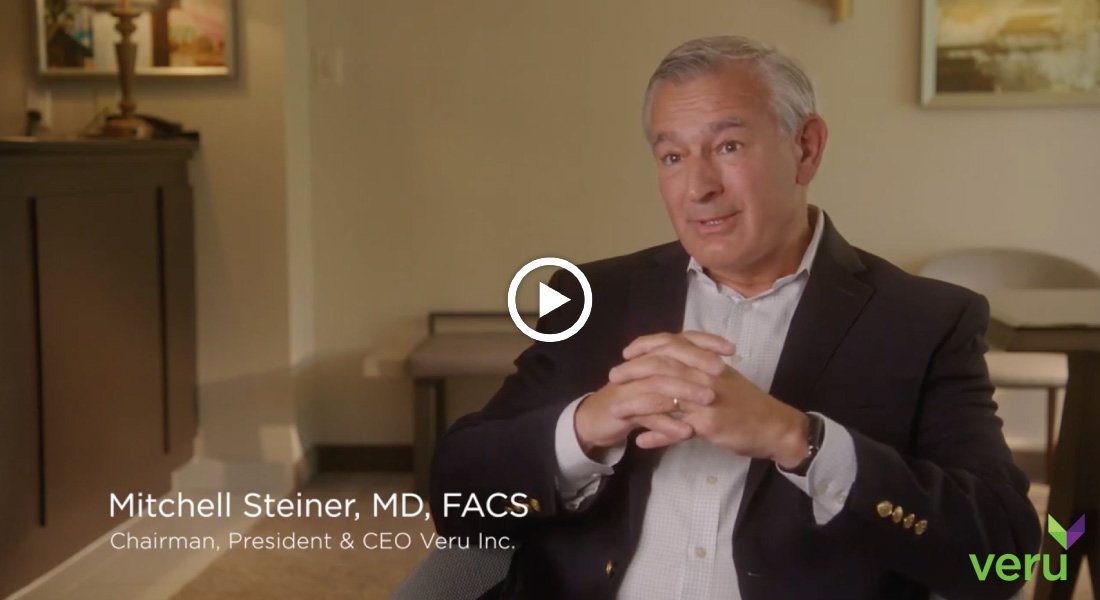 Agents that target tubulin, the subunits of microtubules, have been shown to be one of the most effective targeted cytotoxic chemotherapies for the treatment of metastatic prostate cancer5. Microtubules are critical for cancer cell replication and to shuttle the androgen receptor into the nucleus where the receptor stimulates genes for cancer cell growth. Docetaxel and cabazitaxel are examples of FDA-approved chemotherapy drugs that are given intravenously (IV) that target tubulin to treat metastatic prostate cancer. Although effective, the challenges for this class of chemotherapy agents, also known as taxanes, include that they must be given intravenously (IV) and that the cancer cells develop resistance to taxanes. There are also serious safety concerns with IV taxanes which include serious hypersensitivity (allergic) reactions, myelosuppression (neutropenia) and neurotoxicity such as peripheral neuropathy and muscle weakness.

VERU-111 is an oral, next generation, first-in-class selective small molecule that targets and binds to the alpha and beta tubulin subunits of microtubules in cells. Microtubules are essential for cell division and for shuttling critical growth receptors into the nucleus where they stimulate cell proliferation. Unlike taxanes which bind to just the beta subunit of tubulin, VERU-111 binds strongly to both the alpha and beta tubulin subunits. Furthermore, VERU-111 inactivates by cleaving poly ADP ribose polymerase (PARP) which is important for DNA repair in cancer cells6. VERU-111 has high oral bioavailability; no expected allergic reactions; less possibility for drug resistance as it does not interact with multiple drug resistance proteins so it cannot be pumped out of the cancer cell; potential for minimal drug to drug interactions; and high activity against many tumor types including prostate cancer resistant to drugs like novel androgen-blocking agents (abiraterone and enzalutamide) and taxanes as well as triple negative breast cancer, ovarian cancer, cervical cancer, lung cancer, melanoma and pancreatic cancer. In preclinical and current clinical studies, VERU-111 appears to have no evidence of neurotoxicity and neutropenia, which are common side effects of taxanes and vinca alkaloids chemotherapy agents.

The Company plans to develop VERU-111 initially as a treatment for men with metastatic prostate cancer that is castration resistant and who have also failed to respond to ZYTIGA® (abiraterone) or XTANDI® (enzalutamide). In September 2018, the Company completed a pre-Investigational New Drug Application (“IND”) meeting with the FDA for VERU-111 in which the FDA agreed with the Company’s plans for a Phase 1b/2 clinical trial and that an IND may be submitted for the indication of men who have metastatic castration resistant prostate cancer and who have become resistant to, or who have failed to respond to, ZYTIGA® (abiraterone) or XTANDI® (enzalutamide) and prior to IV chemotherapy. These men have actively progressing prostate cancer with rising prostate-specific antigen and CT or bone scan evidence of spreading prostate cancer. The Company submitted an IND and initiated an open label Phase 1b/2 clinical trial in January 2019 at Johns Hopkins Cancer Center and four other clinical centers. An open label study means that every patient will receive VERU-111. The primary objective of the Phase 1b portion of the study is to define the maximum tolerated dose of VERU-111 (identify the dose limiting toxicity of VERU-111). The Company has also initiated an open label Phase 2 clinical trial of VERU-111 against metastatic castration and novel androgen blocking agent resistant prostate cancer.

Globally, there is a $6 billion annual market and a $3.1 billion U.S. market for 2nd line oral hormone therapies for prostate cancer6. Second line oral hormonal therapies like enzalutamide and abiraterone/prednisone have cross-resistance and appear to provide limited additional benefit when given in sequence for the treatment of metastatic prostate cancer. VERU-111, as an oral therapy targeting alpha and beta tubulin, could be used prior to IV given docetaxel and cabazitaxel antitubulin chemotherapies13. Due to activity of VERU-111 in taxane resistant animal models, VERU-111 could be developed for treatment of patients who have taken IV docetaxel and cabazitaxel chemotherapies and have failed or progressed on these therapies. VERU-111 could also be developed as a 1st line therapy given with androgen deprivation in men who have hormone sensitive, high volume prostate cancer where ADT and docetaxel have been shown in several studies to increase survival in these men by 17-21 months14. Another 1st line indication could be developed in men who have metastatic prostate cancer and splice variants of the androgen receptor including a common variant known as AR-V7. Prostate cancer hormone therapies are not effective in men who have AR-V715. However, this type of cancer appears to respond to docetaxel and may be potentially treated by a novel oral therapy targeting alpha and beta tubulin like VERU-111. VERU-111 could also be developed as 1st line metastatic indication in men who initially were treated with ADT and a novel androgen-blocking agent (enzalutamide or apalutamide) for nonmetastatic castration prostate cancer that has now progressed to metastatic prostate cancer. Finally, VERU-111 could also be developed as an oral dosing alternative to chemotherapies for the treatment of metastatic triple negative breast, ovarian, cervical, lung and pancreatic cancers as these tumors also respond to IV taxane chemotherapies.