The company’s division, The Female Health Company, markets the company’s female condom (FC2) worldwide. Markets include: the global public sector which involves sales to over 140 countries, and the US prescription market (including through the virtual doctor smartphone app “HeyDoctor” at fc2.us.com).

The company also sells Roman Swipes medicated individual wipes in the US, which are a male genital desensitizing drug product for the prevention of premature ejaculation. 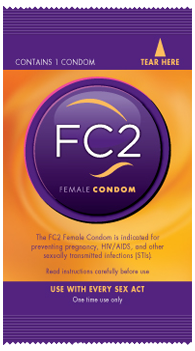 FC2 Internal Condom/Female Condom in the US

The FC2 Internal Condom/Female Condom® is a thin, soft, loose-fitting sheath made from nitrile (non-latex) which is worn inside the vagina. It has flexible inner and outer rings that hold it in place during sex. It lines the walls of the vagina, allowing the penis to move freely inside the condom during sex, the silicone-based lubricant provides a natural sensation and the non-latex nitrile material heats up to your body temperature.

Premature Ejaculation (PE) is the most common sexual dysfunction in men based upon epidemiological studies. PE is a self-reported diagnosis. Men with PE are often reluctant to seek treatment. PE can impact a man’s relationship with his partner. To help manage this condition Veru developed PREBOOST®, now marketed by Roman Healthcare, LLC as Swipes, a 4% benzocaine wipe that can be applied to the penis before sex.

In a randomized double–blind controlled clinical study*, Swipes prolonged the time until ejaculation. After treatment with PREBOOST®, 82 percent of men were no longer considered to have PE while being treated and reported a statistically significant better sense of ejaculation control, confidence, satisfaction, sexual pleasure, increased length of intercourse and reduced frustration. Treatment was well tolerated and no transference of product was reported.